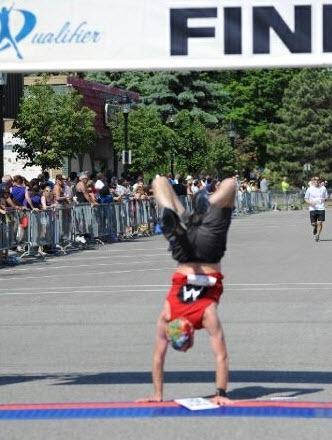 This race was a nice small inaugural race that was only a ~2 hour drive away. In my 100in1 quest, I probably would have run this anyways, but I was asked to be an official pacer for it, which means I got a free entry, which makes it even cooler. This would by 3rd official pacing gig for the pacing company I run for, and I really enjoyed doing this. As a pacer, one of my responsibilities is to pull a shift at the ‘expo’ before the race.

As an inaugural, there were only ~500 marathoners, so the expo was pretty small. We shared the booth with the Motorola Motoactiv sales rep (we all got one to use/keep as they are a sponsor for our pacer company) Our job at the expo is to answer standard questions have about the pacers but with such a small expo, there were not a lot of people with questions. Right next to our booth was the famous Bill Rodgers, who won four Boston marathons and four New York marathons in the late 1970s. He has had a high end running store for many years in Boston and he is at this expo selling several books as signing autographs. We had some great conversations with him, and I even had him sign my race bib. It is always nice to meet real, honest, and friendly legends of your sport.

After the expo, the pacer team (7 of us) got together for a fine meal at a local italian restaurant. As always, the team was made up of very nice people, all with fun running stories. There were two first timers, and they did great the next day but they were understandably nervous mere hours before. The only pacer I knew from previous experience was Pacer Chris who I credit with helping me get into the pacing gig. He was the 3:10 pacer back in St. Louis a few years ago and I ran with him for over half the race and chatted with him about pacing. Within 2 months, I paced my first marathon in Fargo.

Race morning was un-exciting and early as we needed to get to the finish line and be bussed to start and be there roughly an hour before the gun. As pacers, we need to be very visible before the start if the race so people can find us and ask any last minute questions. It was going to get hot and we all knew it, and that was the most popular topic of discussion. This race was built to be fast (It is call the ‘Qualifier’ marathon for a reason) and the course itself was, but the weather was not going to have it. It started out pleasant in the low 60’s, but it would hit 80+ degrees by the time I rolled by the finish line, and got worse for the people behind me. It definitely took its toll on the runners. 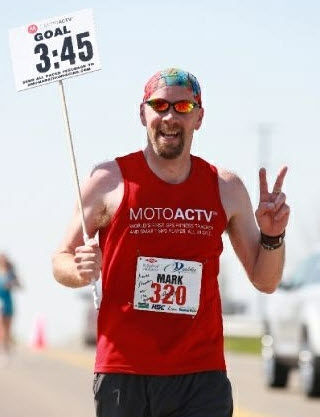 At the start of the race, as usual, I had a large contingent of people with me, about 40 which is huge considering there were only 450 finishers.

As a pacer, my job is to run my miles stone-cold-even pace. At each mile marker, I checked my watch and compared it to my handy pace chart which gave elapsed time for such a pace. I went back and forth in the range of 12 seconds under and 15 second over all day, which is pretty darn good. I normally drop about 40-50% of my runner by mile 10, and today was no different being down to about 15 people hanging with me. As we crossed the halfway point (which I missed by < 5 seconds) I was down to about 8 people holding on, but then the sun started to heat up everything and everyone and runners who were in front of me were dropping back quick. I was consistently passing people every few minutes as the temperature increased.

I was down to one lone person with me at about mile 19 and he hung on for only another mile and a half before he dropped back. As with most of the other pacers I had nobody with me the last miles. On hot days such as this, being a pacer is actually difficult. As you get tired and hot, you have to increase your effort at the exact right rate to keep your net pace even. It takes a lot of mental focus as the day goes on. I enjoy it as a challenge, though. I crossed the Finish right on schedule, 13 seconds before my goal time and was glad to finish when I did as the temperature was still climbing. The post race party was fun, including free beer, pizza and shaded tables. After I had my fill, I headed back home feeling good about yet another successful pacing assignment.
Posted by Doc Ott at 5:20 AM